Skip to content
rigo Sack
Though they met in London and were living in New York, there was no doubt in the minds of Cécilia Saint-Viteux and André Miles that they would marry in Brazil. The Swiss-born Saint-Viteux, whose mother was born in Rio de Janeiro, met the Rio-born Miles at a party in London in 2016. “In fact, André used my name to get into a party—and I will have you know we hadn’t even met each other yet!” explains the bride, founder of the luxury label Saint-Viteux and a Director at PR and Business Development Agency Azzi+Co. Miles, an executive banker at Bradesco, didn’t know the identity of the girl who had gotten him past the doorman at the event, but he soon discovered that the blonde he had just met was the one and only Cécilia Saint-Viteux. The night was full of surprises; later on, after he remarked to a friend just how much he liked her in his native Portuguese, he found out she was fully fluent in the language. The rest was history—or, to be more exact, they were engaged three years later. 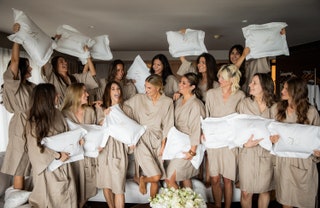 “I opted for a pier where we often visited with a view of the Statue of Liberty,” says Miles of the exact spot where he proposed. “He knelt down on one knee, hoping no one would see us, but little did he know there was an entire basketball team watching us! It was magical,” adds Saint-Viteux. A save-the-date for a wedding in the fall of 2020 soon followed the news the couple was engaged. And yet another one for the following year. “We made our guests save a date three times! In different locations, and with different dress codes,” says the bride of the many pandemic-related starts and stops. In the end, the international couples’ circle of friends and family flew in from all over the globe to Rio de Janeiro for a celebration of their union on April 1, 2022.
The new date proved essential to the wedding’s philosophy. Carnival, had it not been canceled due to COVID, would have taken place a couple of weeks prior to the nuptials—it was all the reason the couple needed to host a Carnival-themed samba night two nights before their wedding. The ingenious padding of the itinerary by one day meant the bride and groom could host a no-holds-barred sort of pre-wedding celebration. And according to those present at the dance-till-dawn extravaganza, a full day to recharge was absolutely required. “We wanted to welcome our guests with the ‘Carioca’ spirit and give them a taste of Carnival,” says Saint-Viteux. Hosted at Rio’s Musical Café Carioca da Gema, guests fueled by caipirinhas were welcomed to join the dancers on stage. Those attendees who were unable to pack, say, a feathered headpiece in their carry-on were offered festive accessories to help them look the part. “I worked with Denis Linhares, a renowned Brazilian hat maker, to set up a hat booth at the entrance of the venue,” Saint-Viteux explains. “He designed an entire collection for that evening inspired by the spirit of Carnival.” Holding court like the queen of her very own Carnival, the bride wore two va-va-voom outfits by Brazilian-based Adriana Degreas, complete with sheer panels, shimmering metallics, and feathers.
The next day was delightfully unscheduled; the bride decided to go the traditional route and spend the night without her groom, writing her vows and preparing for her big day. On the morning of April 1, Saint-Viteux’s bridesmaids turned up around 10 a.m. to start the getting-ready process. Wearing stone-colored linen robes embroidered with a logo her grandmother had designed for the wedding, the bridal party had their hair and makeup done before slipping into their dresses. “I guided my bridesmaids with a very earthy color palette and asked for their dress to be long, but I wanted each of them to be able to freely choose their style and feel pretty and comfortable until dawn,” says Saint-Viteux. 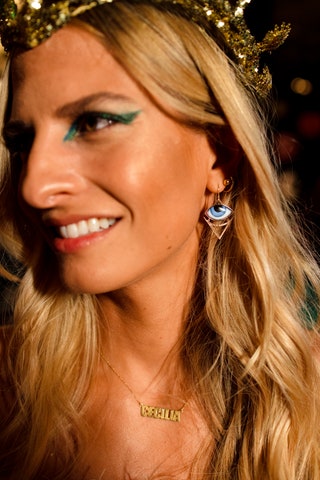 For her own look, the bride wore a custom Silvia Tcherassi dress—a designer Saint-Viteux represents but also a close friend of hers. The gown experienced as many alterations as her wedding date did. “We initially started working on the design in 2019 with the idea that it would be a voluminous gown. A year later, during the pandemic, I visited her atelier in Merrick Park, Miami, and decided that my vision had changed due to the current situation,” explained the bride. “I grew to want a more elegant, sophisticated, and minimal silhouette. It was a funny moment because she shared that she was going to suggest the same thing!” The end result was a gown equal parts classic and modern—a V-necked, A-line silhouette with layers of gossamer white fabric. In lieu of the more traditional lace, a dotted overlay added a more simplistic elegance that was mimicked in her veil. For her hair, she was inspired by Chanel’s spring 2013 runway show and festooned her low, swept-back bun with an oversized pearl. 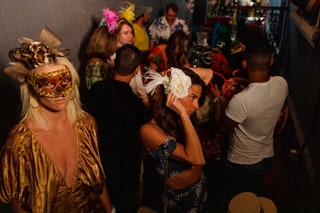 The aisle she walked down was at the Santa Ignez Church in Gavea. The bride recalls gusty winds and unrelenting rain, “but it ended up making the evening even more dramatically romantic. It’s good luck after all!” The groom entered the church with his mom to the song of “Land of Hope and Glory,” and then she followed with her father to Charles Aznavour’s “She,” which was played by an orchestra. Inside the space, ferns, fronds, and foliage helped to create the verdant sanctuary the couple had envisioned. The earthy and understated design scheme would carry over into the decor at the reception, which was hosted on the scenic rooftop of the Hotel Fasano Rio de Janeiro, perched over Ipanema Beach. The vintage car the couple had arranged to transport them to the reception had stalled, but no matter, they Uber-ed back and readied for a night of dancing.
In the spirit of Miles and Saint-Viteux’s laid-back warmth, dinner was served buffet-style without reserved seating, and the dancing started right away, only pausing for speeches from the couples’ dads, siblings, and their closest friends.
The bride then swapped her look into yet another Adriana Degreas set—this time, a metallic midriff-baring number—and though she had planned a hair and makeup switch, she nixed it in the moment so she could get back to her guests. “It seems like it went by in a minute,” she said. “The most special part was being surrounded by all the people we love the most and the merging of our families. We have been envisioning the wedding for so long that we couldn’t believe it was actually happening.” 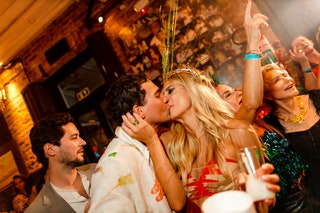 The party continued in the downstairs bar called Baretto Londra, where the couple sliced their cake, enjoyed brigadeiros, and continued dancing the night away to a mix of Brazilian, French, and international music. And under a half dozen hours later, the party was back on the hotel’s much-photographed roof, this time moving a little more slowly, luxuriated by the pool and swapping stories from the incredible night.